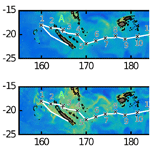 Preface: The Oligotrophy to the UlTra-oligotrophy PACific Experiment (OUTPACE cruise, 18 February to 3 April 2015)

Abstract. The overall goal of OUTPACE (Oligotrophy to UlTra-oligotrophy PACific Experiment) was to obtain a successful representation of the interactions between planktonic organisms and the cycle of biogenic elements in the western tropical South Pacific Ocean across trophic and N2 fixation gradients. Within the context of climate change, it is necessary to better quantify the ability of the oligotrophic ocean to sequester carbon through biological processes. OUTPACE was organized around three main objectives, which were (1) to perform a zonal characterization of the biogeochemistry and biological diversity of the western tropical South Pacific during austral summer conditions, (2) to study the production and fate of organic matter (including carbon export) in three contrasting trophic regimes (increasing oligotrophy) with a particular emphasis on the role of dinitrogen fixation, and (3) to obtain a representation of the main biogeochemical fluxes and dynamics of the planktonic trophic network. The international OUTPACE cruise took place between 18 February and 3 April 2015 aboard the RV L'Atalante and involved 60 scientists (30 onboard). The west–east transect covered  ∼  4000 km from the western part of the Melanesian archipelago (New Caledonia) to the western boundary of the South Pacific gyre (French Polynesia). Following an adaptive strategy, the transect initially designed along the 19° S parallel was adapted along-route to incorporate information coming from satellite measurements of sea surface temperature, chlorophyll a concentration, currents, and diazotroph quantification. After providing a general context and describing previous work done in this area, this introductory paper elucidates the objectives of OUTPACE, the implementation plan of the cruise and water mass and climatological characteristics and concludes with a general overview of the other papers that will be published in this special issue.