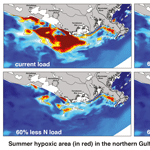 N and P as ultimate and proximate limiting nutrients in the northern Gulf of Mexico: implications for hypoxia reduction strategies

Abstract. The occurrence of hypoxia in coastal oceans is a long-standing and growing problem worldwide and is clearly linked to anthropogenic nutrient inputs. While the need for reducing anthropogenic nutrient loads is generally accepted, it is costly and thus requires scientifically sound nutrient-reduction strategies. Issues under debate include the relative importance of nitrogen (N) and phosphorus (P) as well as the magnitude of the reduction requirements. The largest anthropogenically induced hypoxic area in North American coastal waters (of 15 000 ± 5000 km2) forms every summer in the northern Gulf of Mexico where the Mississippi and Atchafalaya rivers deliver large amounts of freshwater and nutrients to the shelf. A 2001 plan for reducing this hypoxic area by nutrient management in the watershed called for a reduction of N loads. Since then evidence of P limitation during the time of hypoxia formation has arisen, and a dual nutrient-reduction strategy for this system has been endorsed.

Here we report the first systematic analysis of the effects of single and dual nutrient load reductions from a spatially explicit physical–biogeochemical model for the northern Gulf of Mexico. The model has been shown previously to skillfully represent the processes important for hypoxic formation. Our analysis of an ensemble of simulations with stepwise reductions in N, P, and N and P loads provides insight into the effects of both nutrients on primary production and hypoxia, and it allows us to estimate what nutrient reductions would be required for single and dual nutrient-reduction strategies to reach the hypoxia target. Our results show that, despite temporary P limitation, N is the ultimate limiting nutrient for primary production in this system. Nevertheless, a reduction in P load would reduce hypoxia because primary production is P limited in the region where density stratification is conducive to hypoxia development, but reductions in N load have a bigger effect. Our simulations show that, at present loads, the system is almost saturated with N, in the sense that the sensitivity of primary production and hypoxia to N load is much lower than it would be at lower N loads. We estimate that reductions of 63±18 % in total N load or 48±21 % in total N and P load are necessary to reach a hypoxic area of 5000 km2, which is consistent with previous estimates from statistical regression models and highly simplified mechanistic models.