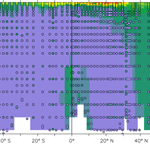 Abstract. Dissolved manganese (Mn) is a biologically essential element. Moreover, its oxidised form is involved in removing itself and several other trace elements from ocean waters. Here we report the longest thus far (17 500 km length) full-depth ocean section of dissolved Mn in the west Atlantic Ocean, comprising 1320 data values of high accuracy. This is the GA02 transect that is part of the GEOTRACES programme, which aims to understand trace element distributions. The goal of this study is to combine these new observations with new, state-of-the-art, modelling to give a first assessment of the main sources and redistribution of Mn throughout the ocean. To this end, we simulate the distribution of dissolved Mn using a global-scale circulation model. This first model includes simple parameterisations to account for the sources, processes and sinks of Mn in the ocean. Oxidation and (photo)reduction, aggregation and settling, as well as biological uptake and remineralisation by plankton are included in the model. Our model provides, together with the observations, the following insights:

– The high surface concentrations of manganese are caused by the combination of photoreduction and sources contributing to the upper ocean. The most important sources are sediments, dust, and, more locally, rivers.

– Observations and model simulations suggest that surface Mn in the Atlantic Ocean moves downwards into the southward-flowing North Atlantic Deep Water (NADW), but because of strong removal rates there is no elevated concentration of Mn visible any more in the NADW south of 40° N.

– The model predicts lower dissolved Mn in surface waters of the Pacific Ocean than the observed concentrations. The intense oxygen minimum zone (OMZ) in subsurface waters is deemed to be a major source of dissolved Mn also mixing upwards into surface waters, but the OMZ is not well represented by the model. Improved high-resolution simulation of the OMZ may solve this problem.

– There is a mainly homogeneous background concentration of dissolved Mn of about 0.10–0.15 nM throughout most of the deep ocean. The model reproduces this by means of a threshold on particulate manganese oxides of 25 pM, suggesting that a minimal concentration of particulate Mn is needed before aggregation and removal become efficient.

– The observed distinct hydrothermal signals are produced by assuming both a strong source and a strong removal of Mn near hydrothermal vents.