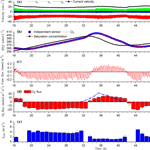 Abstract. Exchange of gases, such as O2, CO2, and CH4, over the air–water interface is an important component in aquatic ecosystem studies, but exchange rates are typically measured or estimated with substantial uncertainties. This diminishes the precision of common ecosystem assessments associated with gas exchanges such as primary production, respiration, and greenhouse gas emission. Here, we used the aquatic eddy covariance technique – originally developed for benthic O2 flux measurements – right below the air–water interface (∼ 4 cm) to determine gas exchange rates and coefficients. Using an acoustic Doppler velocimeter and a fast-responding dual O2–temperature sensor mounted on a floating platform the 3-D water velocity, O2 concentration, and temperature were measured at high-speed (64 Hz). By combining these data, concurrent vertical fluxes of O2 and heat across the air–water interface were derived, and gas exchange coefficients were calculated from the former. Proof-of-concept deployments at different river sites gave standard gas exchange coefficients (k600) in the range of published values. A 40 h long deployment revealed a distinct diurnal pattern in air–water exchange of O2 that was controlled largely by physical processes (e.g., diurnal variations in air temperature and associated air–water heat fluxes) and not by biological activity (primary production and respiration). This physical control of gas exchange can be prevalent in lotic systems and adds uncertainty to assessments of biological activity that are based on measured water column O2 concentration changes. For example, in the 40 h deployment, there was near-constant river flow and insignificant winds – two main drivers of lotic gas exchange – but we found gas exchange coefficients that varied by several fold. This was presumably caused by the formation and erosion of vertical temperature–density gradients in the surface water driven by the heat flux into or out of the river that affected the turbulent mixing. This effect is unaccounted for in widely used empirical correlations for gas exchange coefficients and is another source of uncertainty in gas exchange estimates. The aquatic eddy covariance technique allows studies of air–water gas exchange processes and their controls at an unparalleled level of detail.

A finding related to the new approach is that heat fluxes at the air–water interface can, contrary to those typically found in the benthic environment, be substantial and require correction of O2 sensor readings using high-speed parallel temperature measurements. Fast-responding O2 sensors are inherently sensitive to temperature changes, and if this correction is omitted, temperature fluctuations associated with the turbulent heat flux will mistakenly be recorded as O2 fluctuations and bias the O2 eddy flux calculation.